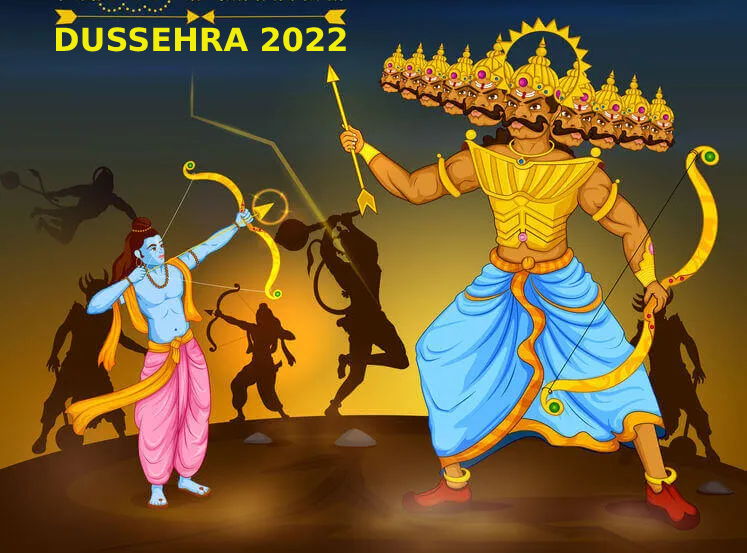 Dussehra indicates the victory of good over evil, and two stories are associated with the festival as per Hindu mythology.

Dussehra, or Vijayadashmi, for the year 2022, will be celebrated on October 15 (Friday) with much passion and enthusiasm.

The Hindu festival is observed on Shukla Paksha Dashmi during the month of Ashwin per the Hindu lunar calendar and a day after Maha Navami or at the end of Shardiya Navratri.

It is said that it was on this day that Goddess Durga conquered Mahishasura after a violent battle lasting for more than nine days. In many parts of the country, it is celebrated to mark the success of Lord Rama over the ten-headed demon king of Lanka, Ravana.

There are many mythological stories behind this festival. This day in some parts of India indicate the day on which Goddess Durga conquered Mahishasur.

That is how all the nine avatars of Goddess Durga are idolized in the Navratri.

The mythology also says that Goddess Durga should be absorbed in water with the devotees, signifying the departure of Goddess Durga.

In south India, the Dussehra festival is observed as the day Chamundeshwari killed the demon Mahishasura.

More common in North Indian states is the term – Dussehra, while Vijayadashami is more common in West Bengal.

In North India, Dussehra is celebrated with much fanfare, and Ram Lila, an enactment of Lord Rama’s story, is organized on all nine days of Navratri, culminating with the conquer of Ravana and burning of his life-size figure on the day of Dussehra or Vijayadashami along with those of Meghnad and Kumbhakaran. Dussehra also indicate getting rid of sins or bad qualities, as each head of the Ravana symbolizes one lousy quality.

Dussehra, for many, means beginning preparation for Diwali, which is celebrated 20 days after Vijayadashami, the day when Lord Rama reached Ayodhya with mata Sita.

Worshipping the Shami tree on the day of Vijayadashami holds great importance in some parts of the country as it is believed that Arjun hid his weapons inside the Shami tree during his separation. Shami Puja is also acknowledged as Banni Puja and Jammi puja in some of the southern states in India.

Dussehra is the festival of the victory of good over sin. This festival indicates those misconduct on some of the other days that come before everyone.

So, Dussehra is considered a day for opening new businesses or investments.